By Driving Force of Nature September 13, 2018
I enjoyed the film (it's actually a 3-part mini-novela.) Production was primitive, and I think this was intentional to add to the backcountry setting. The screenplay was well written with great dialogue (all in nordestino caipira dialect) and excellent acting. I enjoyed seeing Lima Duarte as the Bispo. I remember him from Roque Santeiro, as Sinhozinho
Malta. 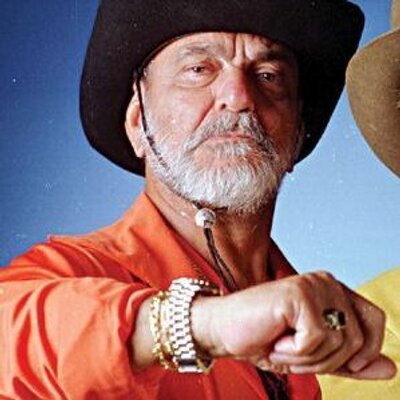 Here he was a bishop on the take. Fernanda Montenegro was Nossa Senhora da Conceição Aparecida: The principal protagonists are Chico and João Grilo: Chico is a coward. João a storyteller who cannot help but lie--none of us can. Here is Chico's knife trick:

Now for the downside. Aside from Fernanda Montenegro's brief appearance during the intervention on behalf of João Grilo and the people caught in his web, the only other female named character is Dora, the adulterous wife of the baker, and Rosinha, played by Virginia Cavendish (Mandrake and many more). Dora is played by Denise Fraga who was in Com Licença Eu Vou a Luta, a film that starred Fernanda Torres, the daughter of Fernanda Montenegro. So... small world.

There are many problems with the film from a sociological perspective. It does not pass the Bechdel Test, because two named women do not have dialogue of two or more lines not about a man. Women are considered property, and a key plot point is Rosinha's piggy bank dowry. Chico's being frouxo (cowardly) is portrayed by adopting feminine traits. Dora's adultery is a trope--Eu adoro homen bravo!--She is faithful to her dog though.

Much fun is made of João's racism, and it is, in fact, well subverted, however... the subversion also underscores the fact there was only one dark-skinned actor in the film, and that's problematic too. In many ways, though Brazilian racism is lower key than in the United States, it is very deeply ingrained in society. Rarely have I seen an actor with clear African traits cast as someone other than domestic help or a villain. To be fair, though, it's been several years since I've put this to a test. I will gather more data and report.

So, all and all the film was good. I wish it were better, but it was in 1999, and we have to remember that great films have many of the same problems. I mean, Princess Leia doesn't speak with another woman in Star Wars Episode 4, A New Hope. And we had to wait for Black Panther for Marvel to address the racial imbalance in the Marvel Cinematic Universe. That was sure worth the wait! :-)