Showing posts from July, 2019
Show all

“Prime Meridian” and Its Many Marses

Prime Meridian by Silvia Moreno-Garcia
My rating: 5 of 5 stars
Silvia Moreno-Garcia’s “Prime Meridian” is about Mars, though not the red planet nor the Roman god of war. Instead, this story features a black-and-white Mars decorated with cheap studio effects, another Mars that exists only as a bond between a young couple that cannot survive the chasm of their inequity of wealth, and a third Mars that calls to Amelia’s soul from a billboard. Each Mars drives the plot and situates the story in terms of real world history, culture, and the history of science fiction.

In Moreno-Garcia’s near future, Mexico City’s wealthy exploit the despair of vast masses of disadvantaged youth in a hyper version of today’s gig economy. Amelia, our protagonist, abandoned her studies of urban agriculture to care for her ailing, dying mother and is saddled with ferrying her sister's children around in the bargain. Amelia calls herself a freelancer on her CV, noting it is a “euphemism for unemployed.” Her …
Post a Comment
Read more 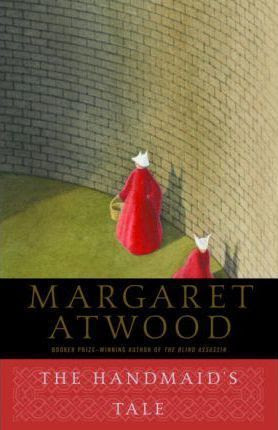 The Handmaid's Tale by Margaret Atwood
My rating: 5 of 5 stars

Margaret Atwood’s The Handmaid’s Tale is brilliant literary science fiction. I will discuss the literary aspects of it in a moment, but first it’s important to place it squarely in the domain of science fiction.

First, under Darko Suvin's definition of sci fi, the question is whether there is cognitive strangeness and nova. They are very apparent, specifically the new assignment of gender roles, along with the reason they exist. The nova introduced are ecological disasters, an enormous rise in failure to Gileadeans to sexually reproduce, and the imposition of a fundamentalist government that divides women by their function, entirely controlling them. We know (again from the lecture) that Atwood was responding to societal changes, such as the rise of the Moral Majority, which lends a spooky plausibility to the strangeness, making it not so strange and that much scarier.